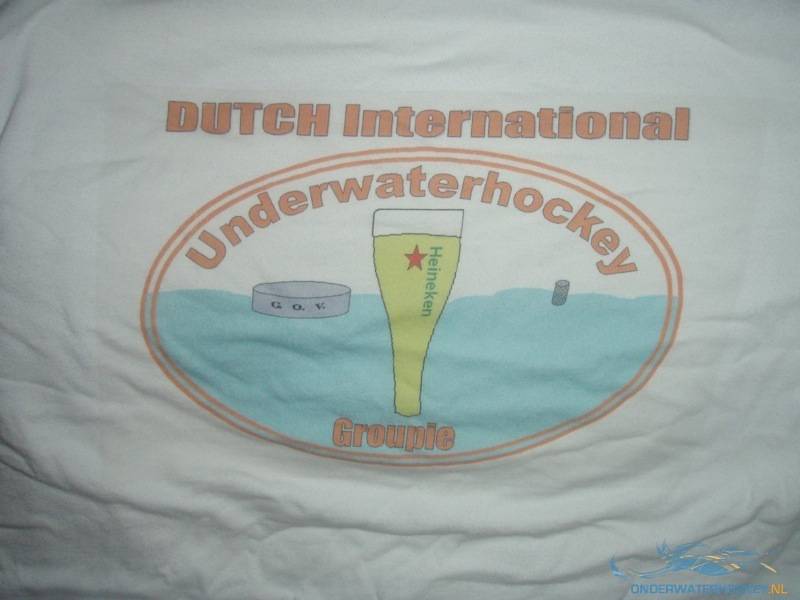 Especially for the Open European championships in Porto this column will be in English. Since you can’t be an international underwater hockey groupie without spreading your word in another language besides Dutch.
No more excitement than an international UWH tournament
I’ve seen ‘m all. World championships, European championships, interclubs, European championships for club teams, GOV international tournaments, Argonauta international tournaments, etc. Met Aussies, Kiwi’s, Afrikaners, GB’s, French fries and many other international underwaterhockey players. Spent several hours on the tribunes yelling and cheering for the Dutch national men and women. Saw them win, saw them lose, saw them cheer, saw them curse, saw them focus, saw them relax, saw them perform, saw them fail. But most of all I saw them enjoy the final party! It’s only 16 days till the party at the moment I’m writing this column. (The calculating types will know the exact date of production before the end of this page.)  Hard to imagine that within 16 days the winner is known (and hopefully a double Dutch victory), fines meeting has made it’s casualties and the first steps on the dance floor are set. Let’s get this party started, bring the champagne, turn the music volume to the max and ‘party like it’s 1999’!!! All the flirting that took place during the tournament will burst and international romances and relationships will start (or end). This year I will arrive on Friday the 23th so I will be able to see the finals and hopefully cheer for the Dutch. Especially for the occasion I will make a new Dutch International Underwaterhockey Groupie t-shirt. So if you’re there you can finally find out who this mysterious Dutch International Underwater Hockey Groupie really is. See U in Porto!!